So you’ve picked up a disposable camera and are ready to shoot photos. It seems pretty easy to use, right? Just wind and shoot. 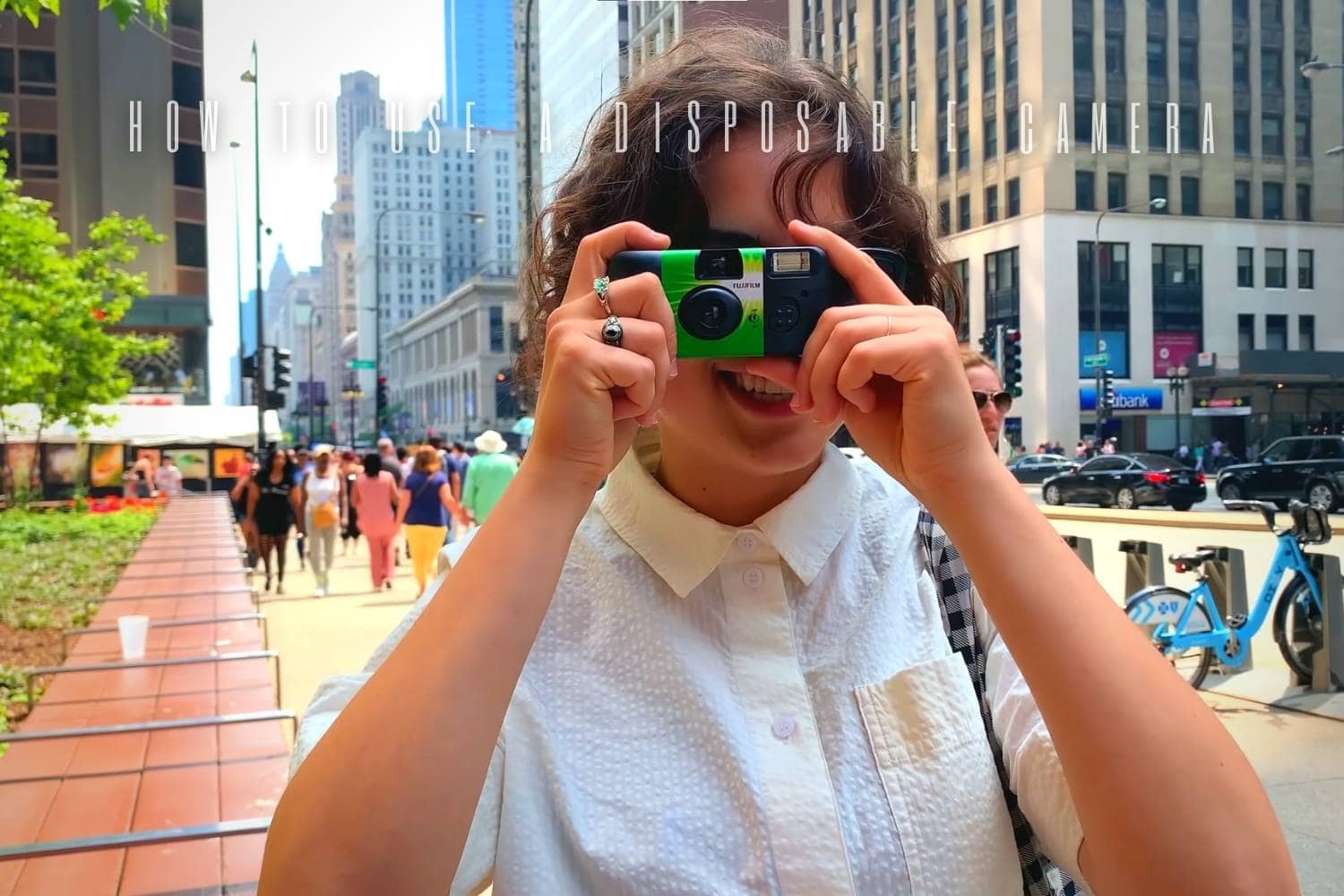 The thing is, you won’t be able to see the pictures you take until the film is developed. It’s pretty easy to waste half the camera if you aren’t careful.

So, here’s a guide to use a disposable camera to make every shot count!

What Are the Different Types of Disposable Cameras?

Single-use cameras are entirely designed on the concept of simple operation. They don’t have many features or control settings to offer, only the essentials for capturing the moment.

That’s why you won’t see brands attempting to incorporate cutting-edge technology as the cameras would lose their essence. Thus, there are only three main types of disposable cameras on the market:

Color film disposable cameras are the most common type. These are popular due to their final colorful lively photos. Simply put, a color film contains one or more emulsions that, after processing, generate colors from the original scene.

These camera models may or may not have a flash button. For example, cameras made specifically for daylight use rely solely on sunlight and don’t include flash as an option.

For anyone who appreciates vintage aesthetics, black-and-white film single-use cameras are an excellent choice. Their images have a warm nostalgic feel to them as if they were taken many years ago.

You see, a black-and-white film lacks the emulsion layers that contain a specific set of dyes that can color the photo. As a result, we get pictures with soft black, gray, and white tones. The majority, if not all, of these cameras have a built-in flash.

Memories can also be captured underwater using a waterproof disposable camera. It’s usually covered with a durable plastic protective layer to keep the camera from failing when submerged in water.

That said, at deep depths in the water, don’t expect to get crisp images. Waterproof disposable cameras don’t have flash bulbs. Consequently, when there’s insufficient light, the quality of the picture deteriorates or blurs. 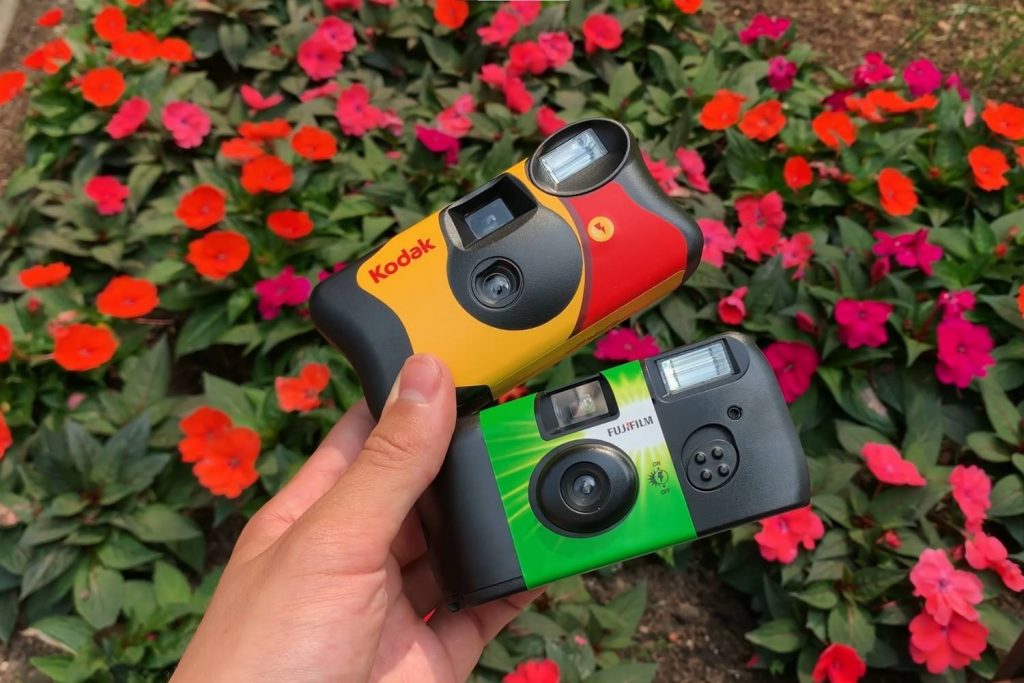 How to Use a Disposable Camera

Now comes the fun part which is getting to know how to use a disposable camera to capture the perfect shot. As you’ll see in a moment, it’s not rocket science. However, along the way, we’ll point out some common mistakes to avoid so that you’re happy with the results.

Without further ado, here are the four basic steps for using a disposable camera:

Step 1: Set the Film in Place

As you may already know, there’s a film divided into frames inside the camera’s body. Each frame is what holds the captured image so that it can later be developed into a photograph.

In disposable cameras, we manually position those frames. That’s why they all have a horizontal scroll wheel dedicated to that task. It’s usually found in the top right corner, at the back, or on the upper side of the camera, but this varies by model.

What you’ll need to do is turn this scroll wheel to the right until it stops turning. This must be done before you take a shot to slide an empty frame into place. In fact, if you don’t do so, the camera won’t take a picture.

You don’t have to use the flash on your camera every time you take a picture. You can only turn it on when it’s dark or if your camera has a low ASA rating and you’re in a low-light situation. Otherwise, use natural daylight to create more vibrant photos.

The shape and location of the flash button vary from one camera to another. The trick is to wait about 5 seconds after pressing the flash button before taking the picture. What will happen during this brief period is that the flash bulb will charge up.

If you took the photo without waiting, there’s a good chance the flash won’t work. There are even camera models that have an indicator bulb that lights up when the flash is ready to use.

Moreover, avoid using flash when taking photos through reflective surfaces. For example, using a flash to photograph yourself in the mirror will result in overexposure. This means that the final picture will be partially or completely white.

Finally, hold the camera up to your eye level to capture the shot. Use one eye to look through the viewfinder, which is the clear rectangle on the camera’s back. You can adjust the photo’s frame however you want, whether you want to take it vertically or horizontally.

Then, depending on the model, press the shutter button or push the lever downwards with steady hands. Make sure that you’ve pushed the button or lever all the way down, then release.

Here’s a quick piece of advice: always hold single-use cameras by the edges. Try not to support it with your fingers from the front because it’s so small that you might accidentally cover the lens.

After you’ve finished all of the frames in your film, it’s time to bring those shots back to life! By the way, you can check the shot counter on your camera to see how many unexposed frames you have left. Check the manufacturer’s instructions to see where this counter is located.

You can drop off your camera at any nearby photo lab to have it developed. Some drug stores can even do that for you, and their prices are occasionally lower than those of a photo lab.

Moreover, online film processing labs are a great option if you don’t have time to visit a local store. 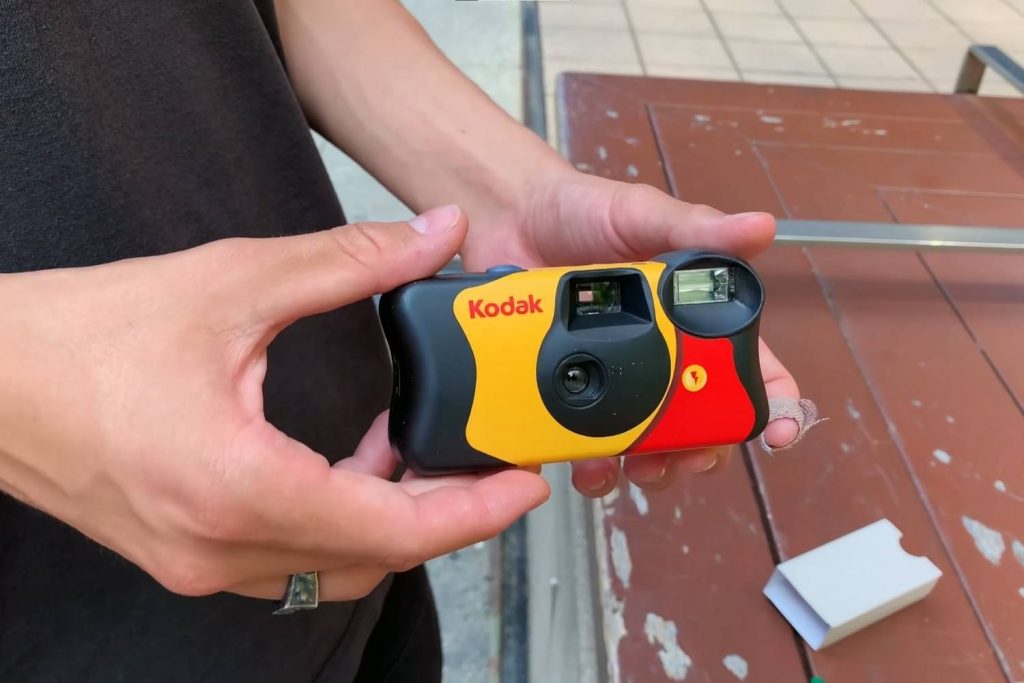 Is It Possible to Reuse Disposable Cameras?

The short answer is yes, you can reload your single-use camera and use it again. Nonetheless, some camera models are easier to open than others.

For example, the process of reloading the Fujifilm QuickSnap 400 camera is far more complicated than that of the Kodak FunSaver. Therefore, if you intend to reuse your disposable camera, select a model that you can easily reload.

Let’s walk you through the reloading process of a Kodak FunSaver in case you have one, or a similar model, that you’d like to reuse. 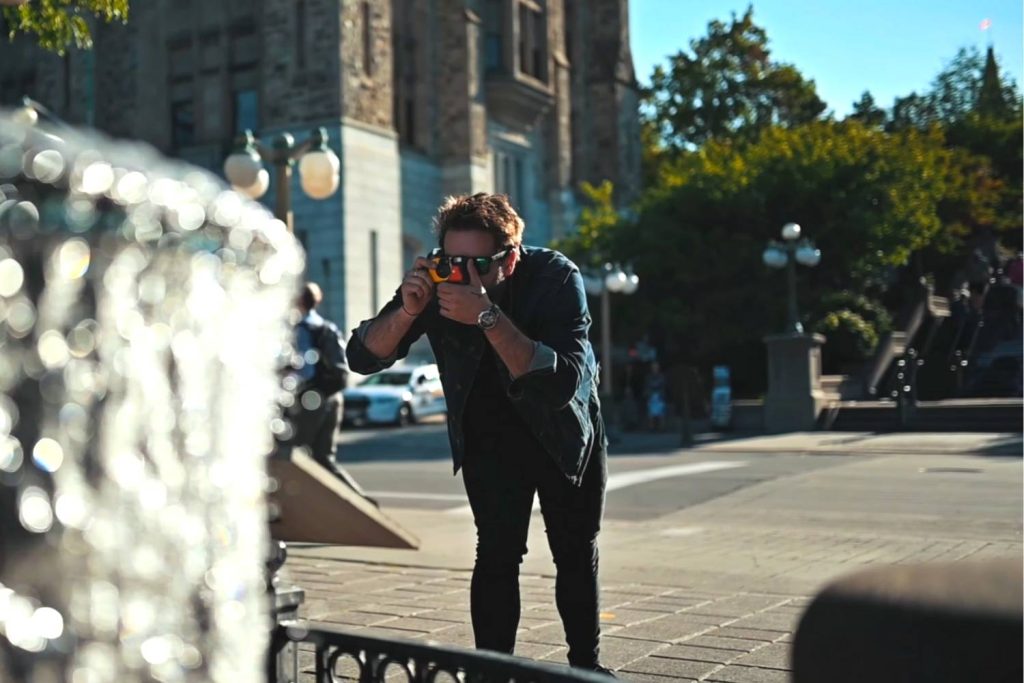 When Do Disposable Cameras Expire?

Time has no effect on the functionality of the single-use camera. Having said that, the film typically lasts about two years from the date of manufacture. Following that, you’ll notice a change in the quality of the photos you’ve taken, and not in a good way.

However, if the camera is properly stored away from heat and humidity, the film can last for up to six years.

If your camera has a flash, it’ll also have a battery to power it. The battery is the second component that can expire in a single-use camera. Fortunately, most camera models have an easy-to-open battery tab that allows you to replace it whenever you want.

On a side note, a low-intensity flash indicates that the battery needs to be changed.

Purchasing a disposable camera will be among the best decisions you’ve made this year. They’re like portable memory boxes that you can carry around and open later for a surprise. We hope that now that you know how to use a disposable camera, it’ll be a pleasant surprise!

Remember, if you plan on reusing your camera, go for reloadable structures. That’s all for now; happy snapping everyone! 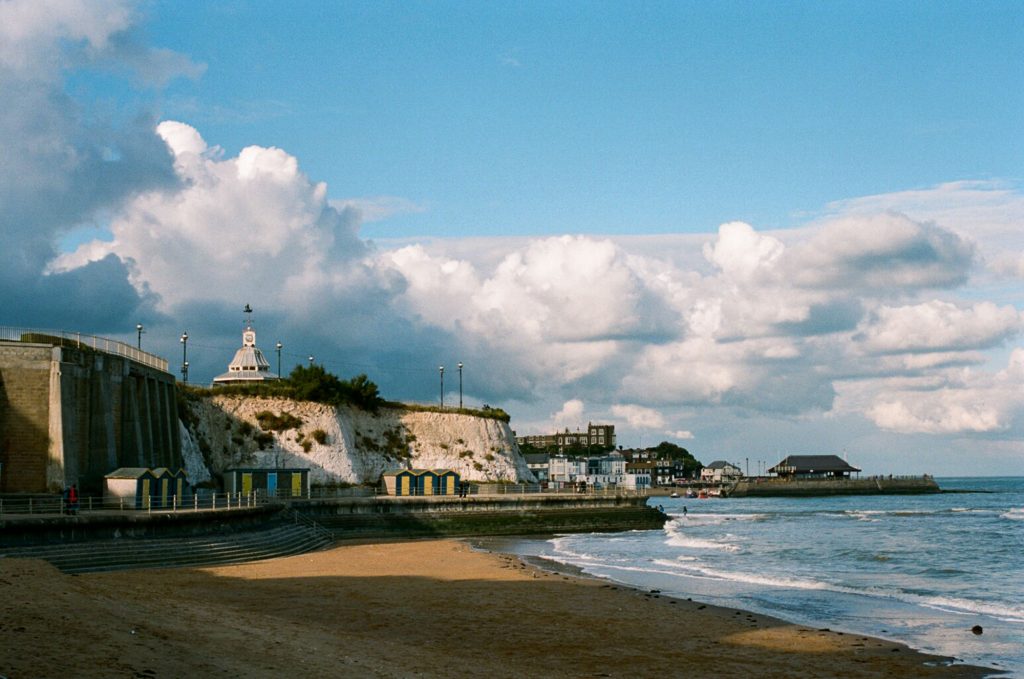 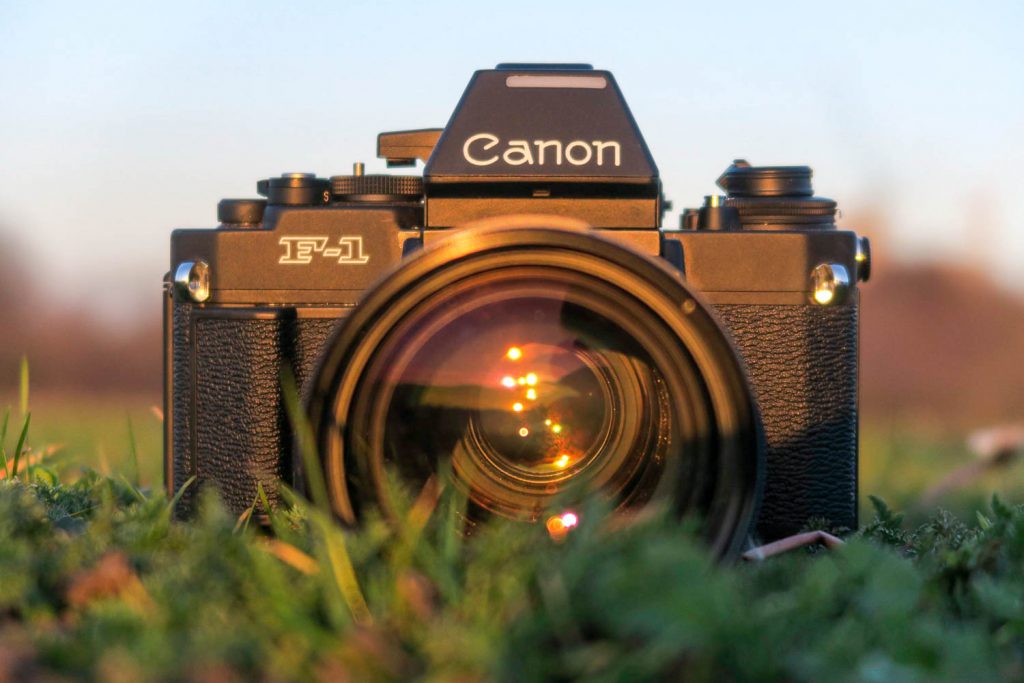 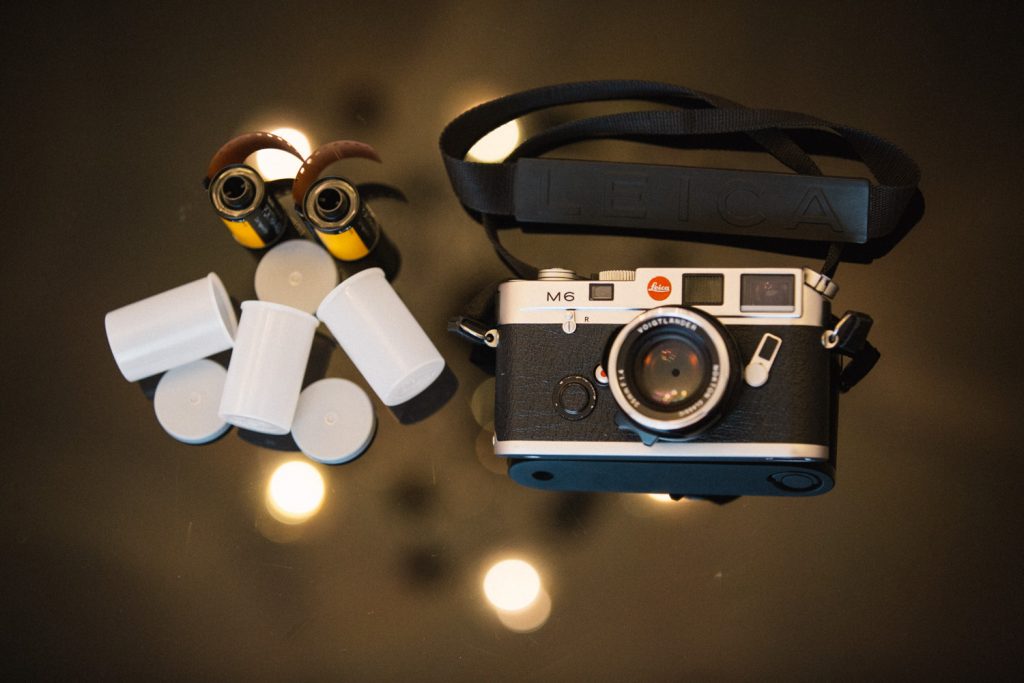 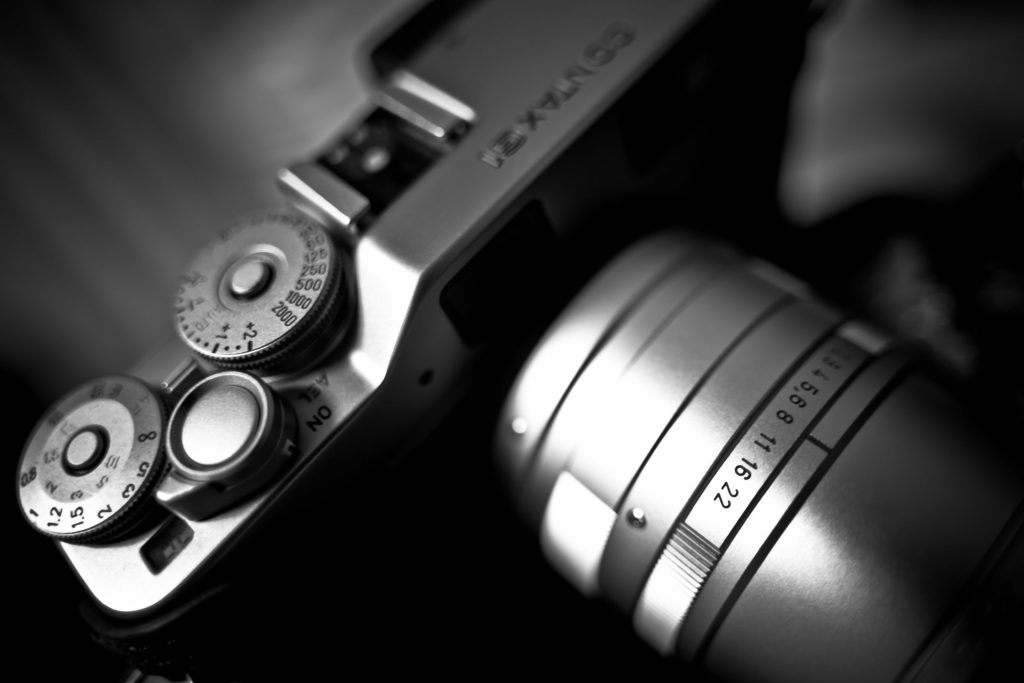