In this Nikon F4 review we dive in why this may be the perfect 35mm film camera for you to pick up. For under a $300 you can get a perfect Nikon F4.

Nikon F4 was introduced in 1988 [1] as a successor to the Nikon F3. When it came out, the Nikon F4 was a true game-changer. It introduced features that played a crucial role in revolutionizing the camera industry. With its game-changing features, the Nikon F4 truly bridged the gap between the classic and the modern Single Lens Reflex (SLR) cameras. It is thus fair to tag the F4 as a modern camera that still retained the classic touch. 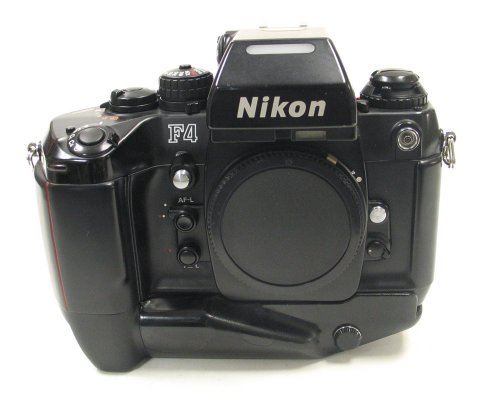 The Nikon F4 had a lot of features that were the first of its kind for professional SLRs. It was the first professional SLR with autofocus, focus-tracking, multi-segment (matrix) metering, and a built-in motor drive for advancing and rewinding film. With all of these new features, Nikon paved their way towards modern photography. The Nikon F4 was truly Nikon’s most revolutionary SLR. It was the company’s giant leap forward.

Who is the Nikon F4 for?

The Nikon F4 was by no means designed with beginners or amateurs in mind. Continuing on the legacy of the Nikon F3, the Nikon F4 was meant solely for the professionals. The body is hefty. And with the larger battery pack/motor drive variants viz. The Nikon F4S and F4E, the weight becomes ever more apparent.

The body is made of a special alloy of Copper Silumin Aluminum and is built like a tank. It will take any sort of punishment that you throw at it. The shutter blades in the Nikon F4 are made from an ultra-lightweight compound material (carbon fiber compound) which is lighter and more durable than titanium. The body is also laminated with a rubber compound body surface that also works as a shock absorber. Further, every lever and dial of the F4 is designed to resist dust and moisture making it the perfect companion for the professionals to work in any sort of challenging condition.

If you’re looking for a film camera just to get a taste of how it feels working with film, then I recommend that you pass on the Nikon F4. You’d be better off getting something less sophisticated. But, if you are someone with a good experience of photography, and would like to work with film on a professional level, this is the camera for you. See our Best 35mm Film Cameras here for more selection.

You can also see our other Nikon reviews below:

Designed by an Italian designer Giorgetto Guigiaro, the Nikon F4 is ergonomic and has a functional design and feels perfect to hold. This is the last of the professional SLRs with dedicated knobs and levers instead of dials and menus. And interestingly, this is the first camera with shutter release buttons on both the vertical and horizontal grips.

Featuring an electronic motor drive, the F4 was also the first F-series camera without the film advance lever. Rewinding too is electronic, but if you’re in a situation where you need to conserve power, you can wind it manually as well.

The F4 is heavy for sure, but it fits well in the hands. The buttons are well-placed, large, and quite easy to reach and operate when looking through the viewfinder. I like how the shooting mode, ISO dial, and vertical shutter release have levers that you need to release for use. This prevents you from accidentally changing/engaging them.

The Nikon F4 comes with three metering systems for maximum capability over the widest range of lighting conditions: Matrix, Center-weighted, and Spot. You can select from any of these metering modes with the metering mode selection lever on the camera.

The matrix metering mode provides the most efficient operation for automatic exposure control. It is ideal for rapidly changing and complex lighting conditions. What’s interesting is that the F4’s Matrix system can sense the difference between vertical and horizontal composition to adjust it’s metering algorithms accordingly.

In cases when you want to expose correctly for the subject, the centre-weighted metering is perfect. It works with 60% of the meter’s sensitivity on the 12mm circle in the centre of the screen; the other 40% of the information required to compute an exposure is derived from the rest of the screen.

Spot Metering is best suited for precise and selective metering of smaller subjects. It is the most demanding for user control and requires an informed and careful operation. It has the most selective sensor and can detect subject brightness in small areas, about 2.5% of the finder area.

Being a camera designed for professionals, the F4 features a variety of exposure modes. There’s the manual mode that lets you take fine control of the exposure. On the other hand, you can also use the camera on a dummy program mode if you want to let the camera do all the heavy lifting. And if you want some amount of control and do the camera do the rest, then there are the Aperture Priority and Shutter Priority modes as well.

The camera does a pretty awesome job when using the semi-auto modes (aperture/shutter priority). The exposure is correct most of the time. But, if you feel that the subject is not being exposed correctly, especially in challenging lighting situations, you might want to either change the metering mode or use the exposure compensation control in the camera.

Introduced to bridge the classic mechanical professional cameras with the electronic model, Nikon made sure the camera would be able to adapt quite well between the AF/MF systems. The F4 was Nikon’s first implementation of auto-focus on a professional SLR. With the simple push of a lever, you can switch between the single or continuous-servo autofocus.

But keep in mind that Nikon introduced this feature when auto-focus was still in its infancy. The camera has just one auto-focus point for that matter, and don’t expect the focusing to be snappy. Its biggest weakness, in my opinion, is not its slowness, or that it tends to hunt if the scene is poorly lit. It’s that the AF zone is so narrow that you really have to pay attention to what part of the scene the AF sensor is pointed at.

The Nikon F4 bridged across two entirely different generations of manual focus to autofocus. Like other manufacturers, Nikon had a big decision to make; either let go of, or retain the lens mount. Nikon made an important decision to retain the same lens mount for their photographic system during the transitional period.

What this means is that with the Nikon F4, you have a huge array of old manual lenses that you can easily work with. With its unmatched lens compatibility, the F4 can work with F-mount lenses from the non-Ai type, all the way to modern G-lenses. However, keep in mind that you will not be able to utilize the full capabilities in all the cases.

Fortunately, the F4 does not require a lens to have a CPU to be able to function in the matrix metering mode. In simpler words, you still get matrix metering when using any F-mount lens. When using Nikon’s Ai, Ai-S, AF-D lenses, the F4 can operate in the program mode, aperture priority, and manual modes. Non-Ai lenses work too, but only with centre-weighted and spot metering, and you would have to use the stop-down metering technique. And since the G-series lenses lack aperture control, they have to be used in shutter priority mode.

See also our post here on How To Use Manual Focus.

Should you get the Nikon F4?

The fact that the Nikon F4 is a milestone for Nikon [2], and the photography industry as a whole makes it a must-have camera for true photography enthusiasts and camera collectors. However, keep in mind that this camera has its set of limitations.

If you can afford the newer F5 or the F6, it makes a whole lot sense to get one of those. The features are much more improved with the later models (obviously). The autofocus was the first of its kind and since it was at an early stage, it is sluggish. So, if you need something fast and quiet, you will not be pleased with the F4.

However, the camera is a very interesting option for serious amateurs today. It makes perfect sense to get the Nikon F4 if you have a good collection of Nikon MF lenses and would like to try your hands with film photography. If you find yourself working in extreme conditions, the camera’s durable and reliable construction further makes it a perfect sense to get the Nikon F4.

Final verdict on the Nikon F4

The Nikon F4 set benchmarks when it came out. With all the first in its class features, the F4 also carries a lot of sentimental values. And of all the other reasons, the camera’s lens compatibility alone makes it a valuable SLR. This is a valuable gift considering Nikon’s legendary line of lenses.

Being the first professional autofocus camera, autofocus technology is at its infancy. It is very slow and loud. But, turn the switch over to manual, and you’ll have a pretty advanced manual camera.

What Is Deghost in Lightroom?

How To Quickly Remove Spots in Photoshop